Objectives: Analyse the dentist to population ratio relative to socio-economic profile to identify areas of workforce shortages and inform the policy direction of workforce recruitment strategies and public dental service planning. Methods: The suburb, state and postcode of dentists listed on the public access register of the Australian Health Practitioner Regulation Agency were geocoded by latitude and longitude and added to a map of Australia built on Australian Bureau of Statistics (ABS) Statistical Area 2 (SA2) census districts. Population data detailing the relative socio-economic disadvantage of each Statistical Area 1 (SA1) within each SA2 was superimposed on the map and used to calculate the number of dentists per 100 000 population relative to level of socio-economic disadvantage as defined by the ABS Socio-Economic Index for Areas, (SEIFA) Index of Relative Socio-economic Disadvantage (IRSD). The results were reported according to state and territory, and the Accessibility and Remoteness Index of Australia (ARIA+). Results: The dentist to population ratio was lower in areas of disadvantage within major cities. All regions outside major cities had population cohorts with dentist to population ratios below the 65 dentists per 100 000 benchmark, conservatively estimated to be the minimum required for reasonable access to services. Conclusion: There is an inequity in the distribution of dentists relative to the socio-economic profile and geographic location of the Australian population. Shortages of dentists persist across many IRSD deciles in regional and rural areas. Within major cities there are fewer dentists per capita in the lower socio-economic districts. Keywords: Dentist, workforce, public, socio-economic 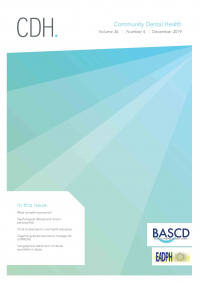