The relationship between sucrose intake in coffee or tea, and root or coronal caries in an elderly Japanese population

The relationship between sucrose intake in coffee or tea, and root or coronal caries in an elderly Japanese population

Objectives: Few studies have examined the effect of sucrose intake in coffee or tea (SCT) on dental caries, especially root caries, in elderly people. The purpose of the present study was to examine the associations between SCT and the prevalence of root or coronal caries in community-dwelling elderly Japanese. Methods: Participants were 370 elders aged 75 years from a larger cohort study of elders in Niigata City, Japan. Dietary habits during the preceding month were assessed with a validated brief self-administered diet history questionnaire (BDHQ). The caries examination was conducted using mirror and ball-pointed periodontal probes under artificial light. Poisson regression analysis was performed to analyze the prevalence–rate ratios (PRRs) between SCT and the root or coronal caries. The number of root or coronal caries was selected as the dependent variable for the analysis. Then, SCT (tertiles labeled low, medium and high) and other 4 variables were selected as independent variables. Results: The PRRs between the number of root caries lesions and SCT were signiﬁcantly higher in the second (medium intake, 1.38, p < 0.001) and third tertiles (high intake, 2.07, p < 0.001). Similar tendencies were seen for the number of coronal caries lesions (PRRs in the second and third tertiles 1.74 and 2.46, respectively, both p < 0.001). Conclusion: A significant positive relationship was observed between sucrose in coffee and tea and the number of coronal or root caries lesions in community-dwelling elderly Japanese. Keywords: Coronal caries, Root caries, Elderly people, Sucrose intake 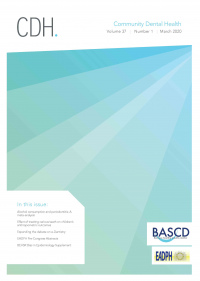