Objective: Describe current Dental Public Health [DPH] curricula content and delivery across European dental schools and ascertain views on a core undergraduate curriculum for dental students. Research design: Survey of European dental schools, informed by professional and academic literature and European Association for Dental Public Health [EADPH] Special Interest Working Group discussions. Questionnaires were distributed electronically, by post, and via EADPH network members, to the Deans of 252 dental schools in Europe. E-mail reminders were sent to non-responders. Setting: European Dental Schools. Results: Around half (n=124, 49%) out of a possible 252 schools responded, all of which reported having some DPH education. Two-thirds reported having a dedicated DPH department. Education was delivered by a variety of staff including those trained in paediatric and preventive dentistry. There were differing degrees of integration within the undergraduate programme and substantial variability in topics, teaching methods and approaches to assessment. Key components of the curriculum supported by respondents were: DPH philosophy and approach, population demography and health, health promotion and disease prevention, health care systems, the dental workforce and planning for health and oral health. Respondents were generally in favour of improving current teaching and shaping a core DPH curriculum for Europe. Conclusions: Amongst those who completed the questionnaire, there was a general agreement on the need for a core Dental Public Health curriculum for European dentists. Given the variation across Europe, increased awareness and prioritisation of the subject is required, facilitated by collaborative support. Keywords: Education, epidemiology, European Union, undergraduates, dental health services 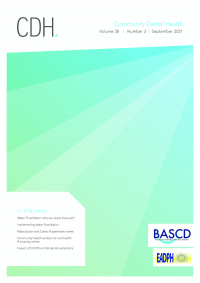