Initial impetus for action Within a decade, the UK has seen a dramatic increase in homelessness. This is defined as being without an available home that could reasonably be occupied. The increase has been driven by increasing poverty, welfare reform, cuts to public services and lack of affordable housing (Bramley et al., 2015; Fitzpatrick et al., 2013; Fitzpatrick et al., 2018). Rough sleeping in England alone has increased by 2,909 people or 165% since 2010 (Ministry of Housing, Communities and Local Government, 2018). This increase has been particularly visible in London (National Audit Office, 2018), where approximately a quarter of the country’s rough sleepers reside (Ministry of Housing, Communities and Local Government, 2018). Keywords: education, outreach, oral health promotion, homeless persons, foundation dentist, inclusion oral health 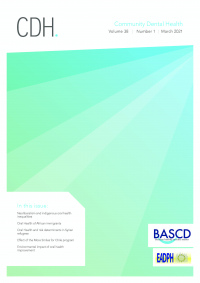