Cabinet member for health and wellbeing, Birmingham City Council; 2 Honorary alderman and former health committee chairman, Birmingham City Council, former consultant in dental public health to Sandwell Health Authority and former regional dental officer for the West Midlands Regional Health Authority; 3Councillor and former mayor. Bolton Metropolitan Borough Council Fifty years ago Birmingham became the first major city in England to fluoridate its water. Tooth decay among the city’s children was rampant. Multiple extractions under a general anaesthetic were common. Fortunately, a far-sighted public health doctor, Dr Leslie Millar, knew about the success of water fluoridation in the United States and Canada and advised councillors to introduce a scheme in Birmingham. Fortunately, the councillors listened and voted in favour of the proposal, despite the efforts of fluoridation’s opponents to frighten the local population with horror stories about the nasty things that would supposedly happen to them. the most and least affluent backgrounds were narrower in areas with fluoridated water. Extending the benefits to other communities Birmingham’s pioneering move inspired many other places to follow suit. Between the late 1960s and mid1970s new schemes were introduced in Warwickshire, Worcestershire, Tyneside, Cumbria, Cheshire and elsewhere. Then, between the early 1980s and mid-1990s, a further wave of schemes was introduced in Coventry, Dudley, Walsall, Wolverhampton and large areas of South Staffordshire. Today, around 6 million people in England are supplied with fluoridated water. As a report by Public Health England (2014) has shown, children in fluoridated areas generally have fewer teeth affected by decay than those in non-fluoridated areas, and at the age of five and twelve years children in fluoridated areas are less likely to have had any decay than those in non-fluoridated areas. Significantly, the PHE analysis also found that 45% fewer children aged 1 to 4 years in fluoridated areas were admitted to hospital for dental decay – primarily to have decayed teeth extracted under a general anaesthetic – than in non-fluoridated areas. Significant dental health benefits In 1964, residents of Birmingham began consuming water whose natural fluoride content had been artificially adjusted to the optimum of one part of fluoride per million parts of water. Within six years, a study (Beal et al., 1971) comparing the Northfield suburb of Birmingham with socially equivalent but (then) non-fluoridated Dudley showed that the council’s bold decision was paying off. The average score for decayed, missing and filled teeth among 5-year old children had dropped by 46% in Northfield but had scarcely changed in Dudley. Science and reason had triumphed over scare-mongering. In 1981, Birmingham’s community dental service released figures confirming the benefits. Since fluoridation began, extractions of deciduous teeth in children aged under 15 had fallen from 35,000 per year to just over 9,000, and extractions of permanent teeth from around 11,000 to 3,500. General anaesthetics for tooth extractions in under-15s were down from 18,000 per year to 2,000, whilst emergency dental visits because of toothache had dropped from around 10,250 to 1,500. Within just 16 years of the start of water fluoridation, children’s dental health in Birmingham had been transformed. A later study (Riley et al., 1991) found that decay levels were generally lower among children in fluoridated communities than among those from socially equivalent, but non-fluoridated, communities elsewhere. It also found that differences in decay levels between children from No evidence of harm to health What about the predictions of those who fought so hard to stop Birmingham from introducing fluoridation in the first place? Nothing has emerged, whether from routine public health monitoring or from specially commissioned studies, to suggest that fluoridation has caused harm to health in Birmingham or other parts of the West Midlands. After reviewing a range of health indicators in all the fluoridated and non-fluoridated areas of the country, Public Health England (2014) found no differences in rates for hip fractures, Down’s syndrome, osteosarcoma and all types of cancer. It did find lower rates of kidney stones, bladder cancer and all-cause mortality in fluoridated areas. However, unlike those opponents of fluoridation who tend to jump on the slightest of differences in health indicators Correspondence to: Alderman John Charlton, 48 Middle Park Road, Birmingham B29 4BJ, UK. Email: [email protected] 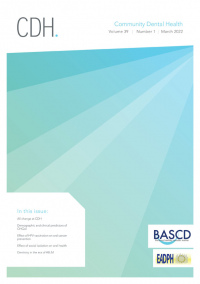